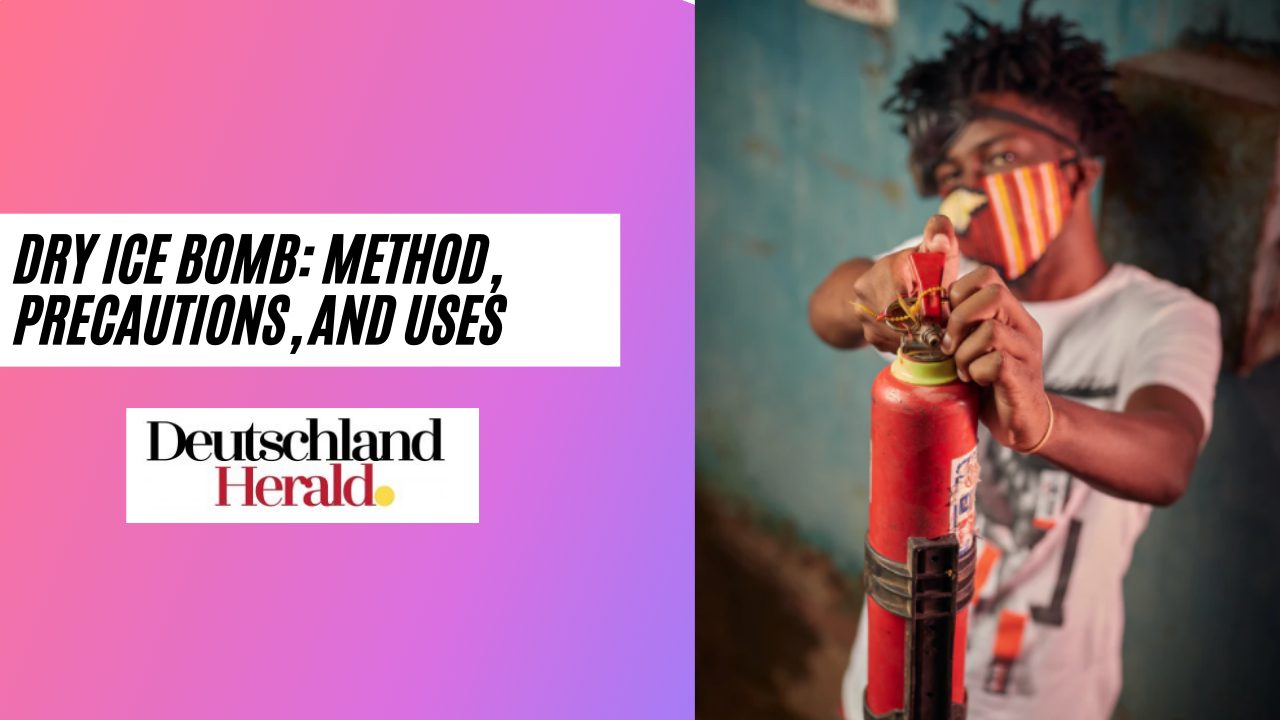 Making a dry ice bomb is easy, and it is used for educational purposes, but it can be very dangerous if precautions are not taken. In this article, we will tell you all about dry ice bombs.

How to Make a Dry Ice Bomb? Fill the bottle 25% with water, and then add pieces of dry ice to it and seal it tightly. The process of sublimation will occur, and the carbon dioxide in the solid form will change into a gas. This creates pressure inside the water bottle, as the gas molecules are now very erratic, they don’t have a place to move, and they hit each other. The wall of the container is at an unimaginable force, and between 30 seconds to half an hour, this dry ice bomb will explode. Yes, it is extremely dangerous if you don’t take precautions or follow the safety guidelines.

Why Is It Dangerous?

It is dangerous because the time frame of the explosion is not fixed; sometimes, it takes mere seconds, while other times, it can take hours to explode. Something that can’t be calculated with ease is unpredictable. It can be a risk at that very moment or a severe threat if the bomb is left unattended because of a false conclusion that we can’t make it work and we did something wrong.

By following the above instructions, you can easily make a dry ice bomb. It will certainly not fail, but the time it will take to explode will vary on the amount of dry ice used. There is no standard for it. The atmosphere where you carry out this explosion will also determine the success and failure of your expedition. Make sure that you are not a serious threat to the people.

The Dangers It Possesses

Can We Use a Glass Bottle For An Ice bomb? In 2011 this became a viral trend on the web. People at their homes filled soda bottles with dry ice and a liquid of their choice and waited for them to explode. The leading age group taking part in this trend were the teenagers, and they even uploaded videos to social media platforms like Youtube.

There were cases of teenagers using it to harm the properties of other people in the USA. In one such case, they attacked a guy’s car using a dry ice bomb, which resulted in a $ 1 million bail for 4 teenagers. There are several videos on the web where the dry ice bomb went wrong. The reason is that the time frame of the explosion was too short. In one particular video, it fractured the bones of a very young boy holding a soda bottle with dry ice pieces with a liquid being tightly shut.

The dry ice bomb is deemed illegal in many states of the USA. People can even go to prison because of the massive consequences.

In countries where it is not legal, it is considered highly dangerous. For example, in many countries, expired cigarettes are not banned, but people do not smoke because of the high consequences.

What Are The Uses Of a Dry Ice Bomb?

The main purpose is to observe and learn the process of sublimation. People also observe that gas molecules are very unstable and can be very dangerous. But using it without proper care and endangering the lives of others by experimenting in a public area can land you in hot waters.

In 2013, a Disney employee named Christian Barnes was held by the police for a dry ice bomb accident in the park. It caused a lot of chaos among the families and the kids present. Especially at that time when a dry ice bomb exploded in a trash can. Upon investigation, police arrested Christian Barnes, and he pleaded guilty to it. He explained that he used the dry ice present in the refreshment section where it was present to cool down the drinks and ice cream.

He saw it as a harmless act and said that he had used the web to learn how to make this ice bomb. The police also stated that it wasn’t just one event in the vicinity of this sort. Police further get reports of all the other cases that are about dry ice bombs and injuries.

The ice bomb is a hazardous thing to make. Without proper equipment, you can potentially end up dead or with several irreversible injuries. So it is better to keep yourself away if you are not an expert. It is not worth it to risk your life for a cheap thrill.

Also, take a look at some hacks, such as How to change the Netflix region in 2022.