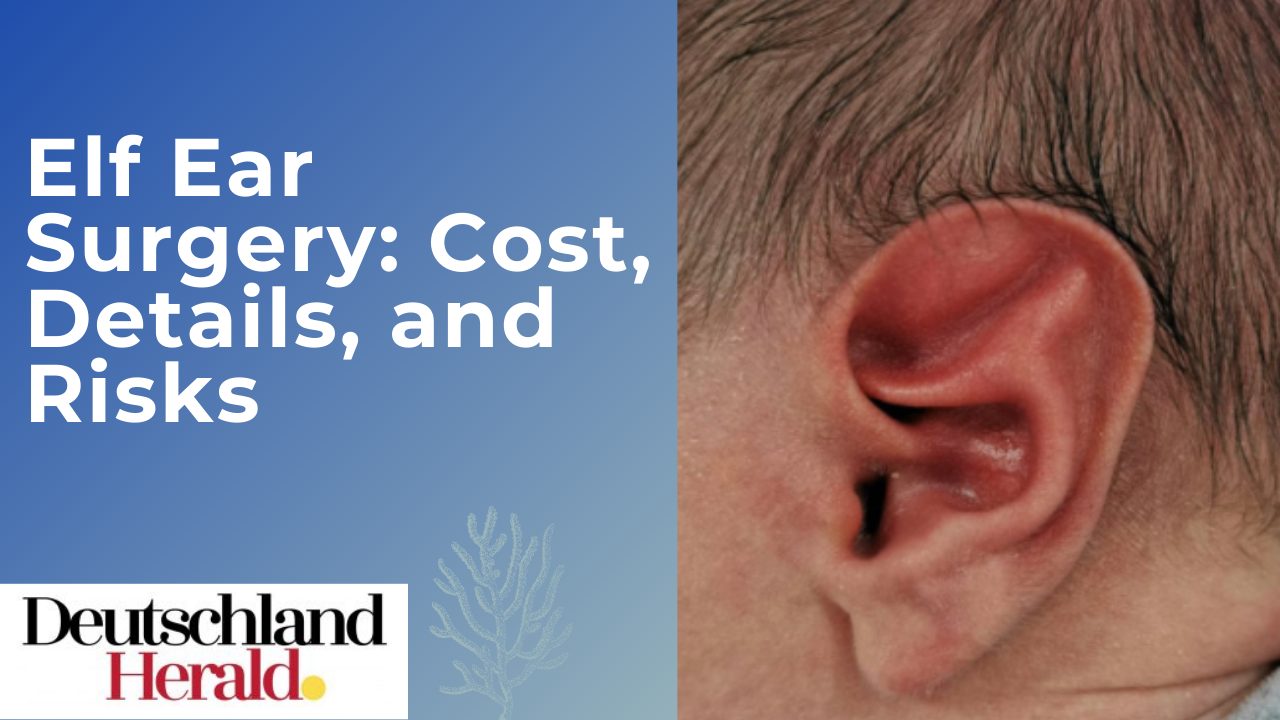 Human nature is built such that it cannot accept something that is not generalized over the whole population. In other words, something that is different. Elf ear surgery is done by people around the globe but still, it is not accepted by society!

In this article, we will cover everything about Elf ear surgery. From its cost, essential details that you can’t miss, and the danger involved in carrying out this operation. Let us first explain what Elf ears are.

What are Elf Ears? Elf Ears are an abnormality of the ear caused by extra cartilage in the ear, causing the ear to be pointy on the outside. This is something that you inherit by birth, and it is not a result of some accident as it is a genetic disease. The Elf Ears can be easily fixed in the first two months after a baby is born. Then you don’t need surgery afterward, and through the technique of molding, the doctors fix the shape of the ear but unfortunately, in excitement or other reason, parents don’t catch the deformity of the ear. Thus it is left untreated, and after these 2 months, the only way to have a normal ear shape is to undergo surgery. Elf ears are also called Stahl’s ears, and this is a very rare deformity 1 in every 6,000 newborns suffers from this.

Elf Ears don’t make you an abnormal person beyond the appearance only as you can hear like an average person, and all the functions of your ear don’t differ from that of the people around you. It is just a thin extra bone in your ear that gives it this shape. If you are comfortable with your appearance and you are not afraid of how society has set the standard of beauty and charm, then don’t worry, you’ll live a normal life, but if not, we will tell you two methods that can fix the Elf Ears but remember the two methods depends on the age of the individual suffering from Stahl’s ears.

Molding of the ear

Ear Moulding is a technique that is not just used to treat elf’s ears. Also many different types of abnormalities with the shape of the ear at an early age. This is typically 2 months since the baby is born. Remember, if there is a missing element in the newborn’s ear, then this technique will not work. It will work only if the shape of the ear is disturbed at birth due to deformation.

The ears of babies are softer than that of an adult or a toddler. As they have lots of estrogen from their mother, and their skin is very soft. Thus making the ear easily to be molded into another shape. The estrogen levels drastically fall after 2 months. The skin of the baby becomes more rigid, and the ears also are hard to mold.

Ear Molding is not always a necessity as the ears tend to self-correct in the first 10 days after a baby is born. Cnce you identify your baby has Elf Ears, wait for 10 days. Monitor your newborn with your doctor and if you don’t see any improvement, then go for the ear molding.

The ear molding is carried out using devices. These devices are available in many hospitals. Molding materials are also used to bring about this correction. First, you need to prepare yourself and accept that your child will fit with a non-surgical ear molding appliance. It can vary with respect to the condition of your child. For the best results, the device is worn by the baby for 2 weeks.

After 2 weeks, the doctor will reexamine the ear. If no improvement is seen, then another device will be fitted to the ear of your kid. This process will be repeated every two weeks if the ear shape is not fixed. If this process doesn’t fix the Stahl’s or elf ear issues of your child, then Elf ear surgery is a must.

As a parent, you should be aware that ear molding will not give your child the perfect ear shape, but rather it will mold the ear such that it is as close as it can be to a normal ear.

There are low-level risks and complications involved in the like it can result in the breakdown of the skin and irritation due to the adhesive used on the device; the ski breakdown is not a big issue as, in most cases, it heals very easily.

It is significantly cheaper with fewer risks and complications in comparison to the surgical way, and it will cost you only $3,000-$6,000. Claire Elise commonly referred to as Grimes, shares two children with Elon Musk.  Recently, she shared that she wants to modify her body with vampire teeth and elf ear surgery. She shared a tweet where she informed about her appointment with a great plastic surgeon. In her recent tweets, she also asked her followers if anyone had done the elf ear surgery and how it turned out to be.

In her tweet, Elon replied that “the downside of elf ear surgery probably outweighs the upside. It shows that he is not in favor of these body modifications. Grimes had made up her mind and did not cater to her reply of Elon positively.

She further replied that “Tbh, this sounds like a job for crisps.” Grimes believes that she is sad as she is born a few generations early, where elf ears and their surgery are not a common thing. When the ear molding fails to bring the desired results, then the surgical method to reshape the ear is the only way left. This type of surgery is also called cosmetic surgery of the ear, and it is done through the process of otoplasty. The patient’s ear is given general anesthesia, so the patient doesn’t feel pain from the surgery. During the operation, the extra cartilage is either removed or closed up, which makes the ears less pointy.

The surgery is mainly recommended for children between the age of 8 and 10, but it can be performed before this age if the doctor sees any other underlying issues with your child. This is recommended to carry out the otoplasty in this age bracket because the ears are fully developed. This procedure is done only on fully developed ears to avoid risk though in rare cases, the doctors might recommend this surgery for a child who is almost 3 years old.

How long does it take to recover from the operation?

Maximum 6 weeks are required to recover from the Elf ear surgery and you can see improvement in the shape of your ear in the first 3 weeks. The ears take few weeks to adjust to their new position.

What to avoid after the operation

The Elf Ear Surgery is not a life-threatening procedure but still, you need to be careful with certain things. You need to avoid water as long as the dressing is there, contact sports, vigorous exercises like weight lifting should not be done, hair brushing and the way you sleep also is very vital.

Is there pain after the elf ear surgery

The pain is mild and can be tolerated very easily. Oral medications are given to control the pain; in most kids, acetaminophen is given to help them combat the pain.

How to sleep post-surgery

Sleeping after the Elf Ear surgery is done is very vital. For the first two weeks, you will be advised to sleep with at least two pillows, so your head is elevated. It is strictly prohibited to sleep on your side after the surgery and you are only allowed to sleep with the back of your head.

Is there any swelling?

Can you wash your hair?

No, you aren’t allowed to wash your hair as long as the bandage is there and once it is off we would recommend you go to a hairdresser so he washes your hair with care by avoiding your ear or anyone at your home can also aid you in this.

Can you drink alcohol after Stahl’s ear surgery?

The risk of bleeding increases due to alcohol as it dilates your blood vessels making it easy for blood to flow. We don't want that and thus avoid using alcohol for one week after the operation.

What is the cost of elf ear surgery?

The elf ear surgery in itself will cost about $2000. This might refute our claim that molding is a less expensive procedure but hold on and think about the hospital charges, the post-recovery charges, the cost of the medicine, and the surgeon’s expertise who performs this surgery. Easily it can cost you in excess of $10000.

Is the Elf Ear Surgery For Adults

Yes, adults can undergo this surgery. It is for anyone who has fully developed ears.

Risks and Complication Of Elf Surgery

Like most surgeries, elf ear surgery also poses many risks, and here we will list the major ones. Always consult with your doctors before going for the surgery, as the risks we include here are the ones that are common, but many hidden risks might be involved.

The scars after the operation will remain forever. The good thing is that they are hidden behind your ears and will not be visible to the people, and are more accepted by society than pointy ears like an elf.

The Symmetry of the ear

The symmetry of your ear might be altered at the end of the operation and the recovery process, so it is better to follow all the guidelines given to you by your surgeon.

In rare cases, people might stop sensing anything where the procedure has taken place.

The stitches can result in additional surgery being required as they might go and affect the surface of your skin around the operated area. This causes an inflammatory reaction, and to reduce this, a new surgery will be done if medicines don’t work on it.

We have come a long way, and surgeries like the elf ear surgery can give results as close as the normal ear, but they aren’t like normal ears, and slight variations might exist, so set your expectations right before going for the surgery.

Many people around the globe do body modification. It is a controversial topic, but many people are not happy with their bodies, and they bring about certain changes.

In the article, we talked about how people are not happy with their pointed ears. They want to get rid of them. There are some people who find it attractive and do surgeries to have pointy ears like an elf.

This procedure is entirely different from what we described above. Elf ear surgery involves shortening a part of the ear while cutting another part of the ear to give a pointed look. The reason for this is because of the many fictional characters in pop culture. Some people even believe that having an elf ear shape can enhance their ability to listen. They can easily listen to music in a better way.

There is no turning back after doing such a body modification. It is not like tattoos that you can easily remove, nor is it like piercing. It is all about science and medicine so take a step that you will not regret.

At the end of the day, it is your choice to have elf-like ears or go and modify your ears to be like that. These types of surgeries are called elective surgeries. You won’t die if you choose not to get it done but to feel good about yourself. Many people select the option of being operated on.