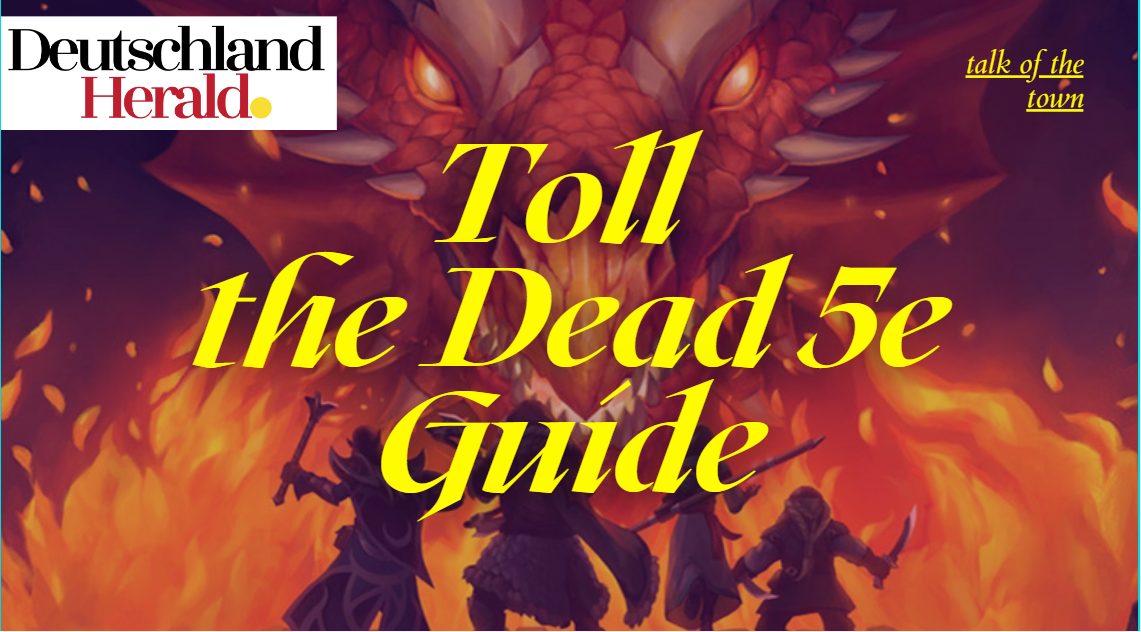 Toll the dead 5e is a very popular spell among Dungeons & Dragons players. It is the best damage cantrip after Eldrich’s blast. The players are often baffled about this dark spell as it can be a little tricky to use. It is quite different from other spells, which add to players’ confusion. To use it properly, you will need to know a lot of things like what character uses it the best and what’s the worst character to use Toll the Dead 5e. Therefore, after a long time of research and trials, we have prepared this guide to help you learn how to use Toll the Dead 5e of Dungeons and Dragons properly.

What is Toll the Dead?

Toll the dead is a necromancy cantrip. Necromancy spells are made by magic that can control the undead and the life force. Toll the Dead 5e being a necromancy spell manipulates enemies’ life force, taking it out of the creatures and causing damage. It is the most effective on the ones that are already low on health. Toll the Dead 5e is a cantrip level spell that means that it can be cast at will without using a spell or any beforehand preparation. It is a “0 level spell”; however, it can work great as an expansion spell if used correctly.
Toll the Dead 5e Specification

You can read the rule of Toll the Dead in Xanathar’s Guide to Everything on page number 169.

What Does Toll the Dead Do?

Toll the Dead establishes a link between a target within 60 feet of the caster and a negative energy source that inflicts necrotic damage. This energy is related to funerals and mourning. As a result, it uses the sound of a dolorous bell to mystically signal its arrival. It imposes chills on its target. You may use a different sound for other cultures, such as a howl of sorrow, drumming, or bagpipes—the bell aspect is mostly a western invention.
Damage inflicted by Toll the Dead
Toll the dead causes purely necrotic damage. If the target is in range and has full health, the Toll of the dead will inflict 1D8 necrotic damage same as the chill touch. The damage can be avoided if the target succeeds in executing the Wisdom saving throw. The spell will cause 1D12 damage to a already damaged target and does not have full HP.
The attack dmg of this spell increases as you level up your character. When the character reaches level 5, the 1D8 dmg increases to 2D8, and 1D12 increases to 2D12. At character level 11, the damage increases to 3D8 and 3D12, and at level17, it becomes 4D8 and 4D12.

How Good Is Toll the Dead?

Again, Toll the dead 5e is easily the best cantrip spell, excluding Eldrich’s blast. Against other spells, a 1D8 attack is already outstanding, and inflicting 1d12 on a damaged target makes it even better. The nicest thing about Toll the Dead is that it is a Wisdom save spell. Only a few enemies have a high level of wisdom. It also guarantees half damage as a saving spell. Which, in my opinion, is preferable to the attack roll spells’ probability of causing no harm at all. Compared 1D10 attack on an AC, a 1D8 attack on a Wisdom would be more substantial.

Who Can Use Toll the Dead 5e Most Effectively? Toll the dead can be used by Clerics, Wizards, and Warlocks. This cantrip is especially useful for clerics whose other option is Sacred Flame, which is a 60 feet spell but with a dexterity save and radiant damage that only deals 1D8. It appears to be an alternative for warlocks, but it is unlikely to be a contender to Eldritch Blast. It’s a good choice for wizards in general, but especially for Evocation wizards. This is one of the few cantrips that can be used in conjunction with Potent Cantrip (6th level ability). The only other two are Acid Splash, which has a 1D6 dexterity save but can hit two distinct creatures if they are close together and has a 60 feet range, and Poison Spray, which has a 10 feet range, a con save but does 1D12 damage.

How to Balance Toll The Dead

The only way to balance Toll the dead is to succeed on a Wisdom saving throw. If the target can save, nothing happens, and no damage is inflicted on it. Despite being one of the most powerful cantrip spells, it is still a necrotic dmg spell. Necrotic damage is the least effective, as many monsters are immune to it. Furthermore, a character that owns a weapon can easily inflict the same amount of damage as any cantrip can; however, nothing beats the Eldritch’s Blast.
However, if you want all of your creatures to live, choose creatures with high WIS or creatures who are proficient in wisdom saving throws. It isn’t all horrible, though. You may also use groups of adversaries to reduce the effectiveness of a single target. Toll the Dead is a great spell, but it is not over-powered and can be countered, though not so easily.

Toll the dead is undoubtedly one of the best cantrip spells to exist in Dungeons and Dragons. It is a great spell, especially for Clerics. What gives it an upper hand is that not many creatures have enough level of Wisdom to succeed in a Wisdom Saving Throw to balance Toll the Dead 5e. If you are looking for an easy way to win, using Toll the Dead may be the cheat you need to know.
Even though Toll the Dead 5e is an amazing spell you can use, you still should learn another type of attack to keep the game interesting and get more powerful. This spell is good, but there are other good alternatives to it, and you should not wholly rely on it. This is all you need to know when dealing with Toll the Dead. Good luck with your journey!

Read about other games: How to fix Roblox code 524?