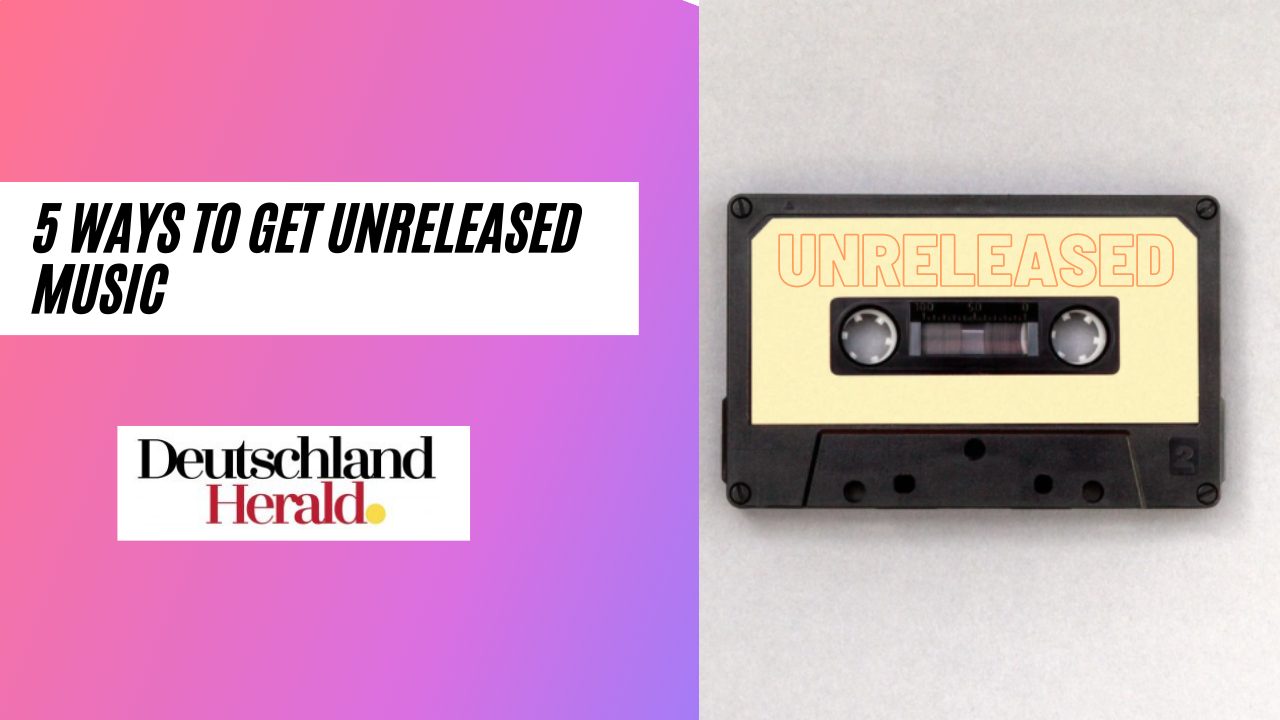 Sometimes we are impatient, and it is hard for us to hold onto our horses when our favorite musician or band is about to release new music. Sometimes they take too long, and there are leaks, and other times, it is just not available in your region; we will tell you 5 ways to get unreleased music in this article, so stay tuned. DJs face the main problem with unreleased music. The public always requires new music, and for that, the DJ has to find the platforms to get it urgent and with the highest quality.

What is unreleased music? All those soundtracks that an artist has produced recently but has not released to the public are known as unreleased music. This music is not sold to any streaming site yet and is only present in the hands of the artist that produced it. The track gets leaked somehow, and from there, it reaches multiple platforms from where you can easily download it. Take a look at the unreleased music websites and how to find unreleased music.

Ways to get unreleased music

Torrents have been here for a long time. Some see it as an antidote to the virus of capitalism and how the rich exploit the poor, while others see it as stealing. I will leave it up to you, and you are the one to decide which side you are on. On torrent, many leaked music albums have been released historically, and even today, there are instances when unreleased music has been released by famous groups on there for free.

To download the music, just go to any torrent site and then use a client like Utorrent or qbittorrent to download your favorite album or a song. Be very careful not to download a virus or a trojan as they are filled with many trojans and viruses; always download after looking at the comment section of the uploaded torrents and turn on your antivirus at all costs before initiating the download. Make sure you have the right torrent or take a look at how to download a torrent on your mobile device. Soundcloud is not as popular as Spotify, but it does have a great fanbase. The platform’s fanbase is so loyal that it saved the website from liquidation a few years back. Nevertheless, the reason for such loyalty from them is because it is free to stream, unlike Spotify, which requires you to pay a subscription fee to get the best out of it.

On Soundcloud, many small and upcoming artists release their music beforehand to check what the public has to say about it and to seek feedback. On Reddit, you can find literally anything you want. that social media platform is a gem, and once you get to know about the power of that platform, there is no turning back, and the other platforms will look like they are made for children only. On Reddit, it is now tough to find such things directly as the Reddit administration was forced to have these rules because of the controversy surrounding the deep fake and other celebrity leaks.

This doesn’t mean that you can’t find subreddits over there. Just dig deep, and you will find a goldmine over there. They are mostly discord, dropbox, or mega link from where you can download unreleased music. Yes! Even on Spotify, you can find unreleased music. But here, we have two methods for it; none will get you into hot waters. Both methods are 100% safe. The first method is to look for the unreleased music of your choice in the podcast section of Spotify. Yes, it is unreliable, and they are taken down very quickly, but if you are lucky enough, you will be able to find them.

The second method is only doable if your region is getting the music late and it is region locked on Spotify. Download a credible VPN for your device and then use it to stream the music. It will work like a charm.

To get unreleased music, you can pay someone online. You can also get it physically through shops because it is not always free. Music that is created in the studio can be easily leaked by the people working there. Sometimes it gets leaked by the fierce rivals of that studio. They are then sold in the market to the highest bidder. That is how the torrent groups or the people on Reddit get their hands on it. From there, it spreads out in public.

It can also be a result of a hack or bribing someone in the studio. Let’s not dig deep into that, but the best way to get such music is to look at Reddit. You can also hunt it on other social media sites like Facebook. There are many people who sell unreleased music to you, but there is a big risk involved. You might get scammed in the name of unreleased music. Apart from music, you can also download YouTube videos on your mobile phones easily.

Getting unreleased music at the end depends on your own morality and the ethic you carry with yourself. We wouldn’t suggest you go and use any of the above 5 Ways To Get Unreleased Music. Except for the Soundcloud method. The reason is that you will be cheating the creators who put hours into making the music. These people deserve each and every penny for it. Downloading a leaked copy or spreading a leaked copy can have catastrophic effects on the content creators. It can result in them not having the urge to make music with the same intensity again.

Yes, we know you might be impatient, and he or she might be your favorite artist. It is hard to control the urge not to listen to the new vocals. If you respect the artist, you will never go down the path of getting unreleased music through illegal means. Even if it is the fierce competitor of your favorite.